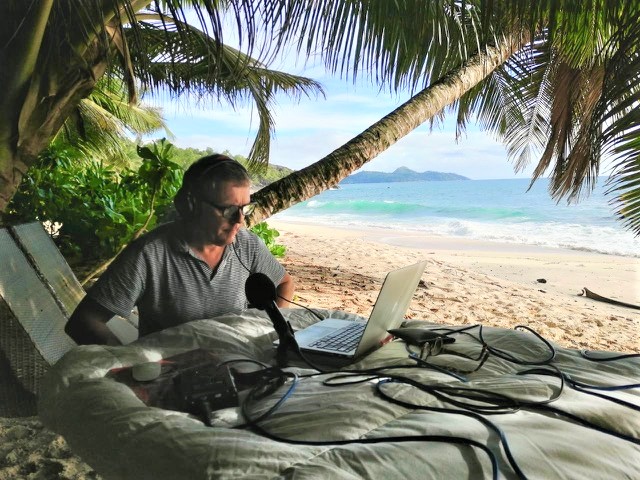 Podcast Radio is showcasing the new season of a specially written fictional mystery story read and recorded on location in Seychelles.

It features former BBC Radio 4 announcer Patrick Muirhead and will be on air from Monday 15th November.

The new season of The Mahé Mysteries, called Time of Innocence, is about an island reggae star who is accused of murdering two American sisters in their tourist hotel.

Investigative journalist Patrick, who lives on the island in real life, sets out to prove he was framed.

The ten-part series will be featured daily over two weeks and be released as a Podcast Radio Original on all major platforms shortly afterwards.

Patrick – renowned for his deep voice and traditional English accent – recorded all the episodes on location on the beach in front of his home in the middle of a coconut plantation on Mahé Island, Seychelles. It features an atmospheric signature tune specially composed by Mahé musician Isham Rath.

“The first series earlier this year was really popular with our on-air audience and was downloaded thousands of times so this new story is much anticipated.”

Patrick says: “Seychelles are beautiful islands which hide some dark secrets. It’s great fun telling these tales of murder and mystery set in paradise. Podcast Radio is giving me the opportunity to showcase these stories which I hope will be published soon in book form.”

The Mahé Mysteries – Time of Innocence – by Patrick Muirhead first airs on Podcast Radio at 6pm on Monday 15th November and then daily at the same time for the next two weeks.