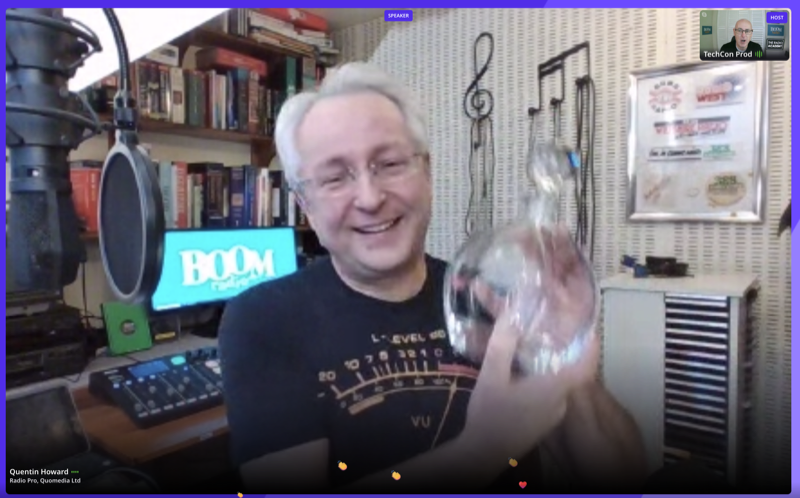 The Radio Academy has awarded a Fellowship to radio engineer Quentin Howard.

The Fellowship – the highest accolade The Academy gives to distinguished colleagues with a lifetime of service to radio and audio – was awarded at Radio TechCon, the industry’s technical and engineering conference on Monday.

It was presented at the conference by existing Fellow Phil Riley, who praised Howard’s achievements through the last 40 years of commercial radio history, including – as Director of Engineering at GWR – masterminding the launch of the UK’s first National commercial FM station Classic FM (including recording birdsong in his own garden, to use as the now famous test transmission).

As Chief Executive of the original national DAB multiplex, Digital One, he masterminded the technical aspects of the winning bid, and went on to work with leading chip set manufacturers to drive down the cost of DAB radios and make them accessible to all.

Howard continued his career working with the Services Sound and Vision Corporation – later rebranded as the British Forces Broadcasting Service – and is now a key part of the management team running Boom Radio, an entirely virtual national radio station launched during lockdown. He is a multi-Radio Academy Award Winner, a member of the Commercial Radio Roll of Honour, and Digital Radio Hall of Fame.

Phil Riley, Chief Executive of Boom Radio and Fellow of The Radio Academy said: “Quentin is a true giant of the industry, and I am delighted the Radio Academy has honoured him with a Fellowship today. It was especially meaningful to surprise Quentin with this today at Radio TechCon, amongst a community of his fellow engineers, many of whom will be in his personal debt and perhaps have no idea. On behalf of The Radio Academy, I warmly welcome him into the ranks of Fellowship.”

Sam Bailey, Managing Director of The Radio Academy, said: “As I read more and more about Quentin’s career, I couldn’t believe he wasn’t already a Fellow of the Academy – this honour is well overdue. I’d like to thank Quentin for his incredible career, and I’d like to thank Radio TechCon for letting us use their platform today to honour Quentin in front of his colleagues.”