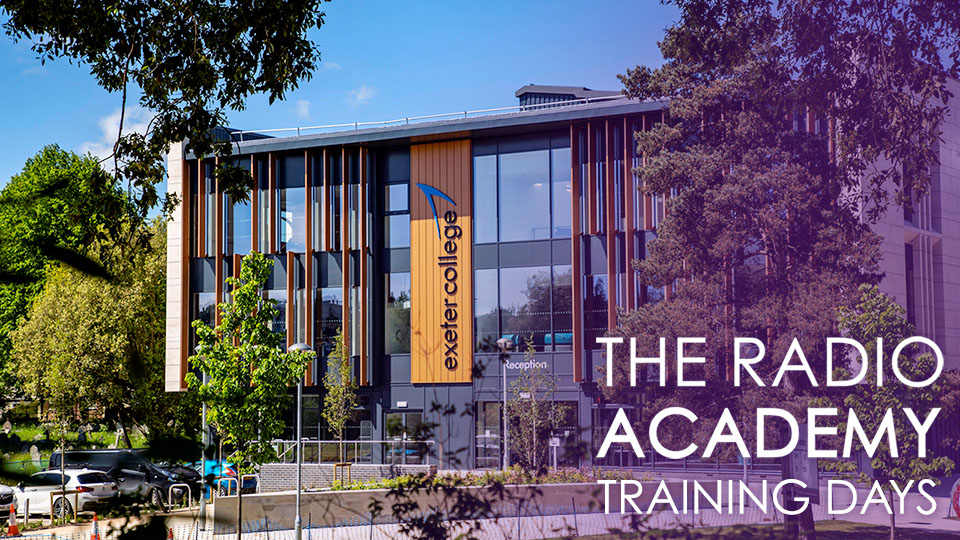 The Radio Academy is hosting a Training Day in Exeter on the 30th of March with speakers including Magic’s Harriet Scott, Virgin Radio’s Mike Cass and Absolute Radio’s Dan Noble.

The five-hour event starts at 1pm, and will include a programme of talks covering programming, music, news, features, imaging, technology and a demo clinic for aspiring presenters, ending with networking drinks in a local bar.

The Training Day will take place at Exeter College Hele Road Campus, and is open to anybody that wishes to attend for a fee.

The bosses of both BBC Radio Devon (James Watts) and BBC Radio Cornwall (Emma Clements) will be speaking, and they’ll be joined by BBC Introducing South West presenter Sarah Gosling.

Radio Exe Managing Director Paul Nero will be there, along with the station’s breakfast show presenter Matt Rogers, and KISS FM Producer and Exeter University Alumnus Grace Hopper will be making a return to the city, and bringing with her KISS presenter Alex Mansuroglu.

Announcing the Exeter Training Day, Managing Director of The Radio Academy Sam Bailey told RadioToday: “I’m so excited we’ll soon be back doing hands-on, in-person training for the radio and audio sector. This event is for everyone – professionals, volunteers, hobbyists, students, podcasters – anyone that loves making audio, and wants to learn from some of the best in the business.”

Rob Bosworth, Vice Principal and Deputy CEO of Exeter College said: “We can’t wait to welcome The Radio Academy to Exeter College on 30 March. Our students are going to really benefit from the training day, enabling them to make contacts within the radio industry.

“We’re also extremely excited to open our doors to the entire audio and radio sector in the South West and show them what Exeter College has to offer.”

Co-chair of the Radio Academy South West Branch Paul Nero said: “There’s so much radio and audio talent here in the South West – from student and community radio, to the BBC, to the only commercial radio station broadcasting from Devon, Radio Exe and the national commercial brands too.

“I’m really proud that the first of the new Radio Academy Training Days will take place here in Exeter with the help of Exeter College, and I encourage everybody to come along and learn from what will be an incredible line-up of experts.”

Full details and tickets are available now at radioacademy.org/training.