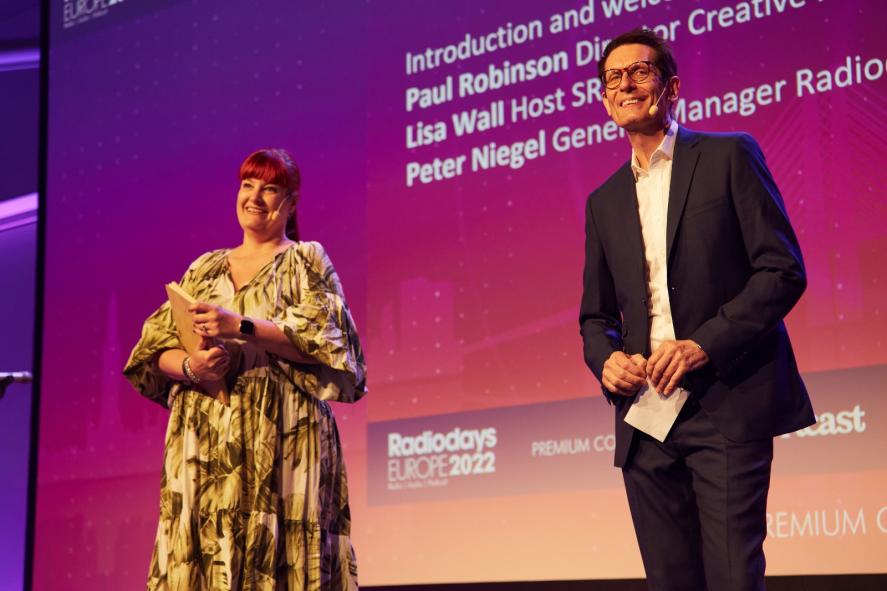 A packed 48 hours of radio sessions, questions and socials took place in Malmo over the last few days as hundreds gathered for Radiodays Europe.

Sunday afternoon kicked off with the brand-new Podcast sessions and Radiodays Europe Women.

Sunday evening was all about catching up with radio friends you haven’t seen since 2019, and being amazed at home much healthier/older/greyer they look.

Which brings us to the official start of Radiodays Europe at 9am – and after a performance artist Darin, Paul Robinson (Director of Creative Media Partners) and Lisa Wall (Host at Swedish Radio) welcomed attendees with a quick Swedish lesson before Peter Neigel (General Manager of Radiodays Europe) took to the stage.

‘Audio today is stronger than ever’ and ‘audio tomorrow is brighter than ever’ he said, setting the agenda for the conference which was set to deliver plenty of information on the current state of radio and both educate and encourage its attendees to think ahead.

The ongoing conflict between Russia and Ukraine was a big topic of conversation at the conference, as both Edita Kudláčová (Head of Radio at the European Broadcasting Union) and Cilla Benkö (Director General of Swedish Radio) touched on.

Swedish Radio has seen large increase in listeners since the start of the war proving that radio remains a valuable public service.

Appearing via video link from a bomb shelter, Ukraine Public Radio’s Dmytro Khorkin (Journalist) and Andriy Taranov (Board Member) said that they have not stopped broadcasting since the start of the war in February, highlighting that Russian groups have destroyed Ukrainian telecoms networks but that radio continues to connect the country’s citizens. The only form of media somebody in Mariupol can receive is Ukrainian AM radio.

Speaking of collaboration between radio and politics, Stefan Möller (President of the Association of European Radios) said that ‘radio is the most trusted medium’ and that conference goers should use radio to ‘protect freedom of speech and bring entertainment and news to the listener’.

“Radio is the most trusted medium. Let us protect freedom of speech. It doesn’t matter who wins. Just important that the bad one lose. – Stefan Möller AER #RDE22 pic.twitter.com/zo0h6B5QMe

Meanwhile, Siobhan Kenny (Communications Consultant for former Radiocentre boss) spoke about the diversification of radio and the importance that radio stars can hold in listeners lives. Christer Modig (VP Radio at Nent Group Sweden) also believed strongly in the connection that radio hosts can have with listeners and doesn’t believe that streaming service like Sweden-founded Spotify can compete.

The first non-opening session in the main room was with two radio presenters who host music shows. Angi Taylor (Morning Show Host on ROCK 95-5) and Angie Greaves (Host on Smooth Radio) work 4,000 miles apart – one’s from the US and one’s from the UK – and each host two very different styles of radio programme. What unites them?

Angi Taylor got into radio by doing an internship, answering request lines before sending a demo and landing a presenting job. Meanwhile, Angie walked into Capital Radio on a six-month contract as the Head of HR and got her position after an overheard impression led to a demo request.

iHeart’s Rock 95.5 is Chicago’s rock station and Angi landed her present role with a mixture of ‘courage and receipts’, statistics that show why listeners love her and enough passion for radio to ask for the coveted breakfast position. Greaves’s story is similar. When Global took over Capital, Heart and Smooth, she thought her programme would be replaced with networked alternatives but they networked her programme on drive instead.

Despite their geographical distance, they’ve both heard the lie ‘Women don’t like to hear women on radio’. Both women agree that comfort is the enemy of progress in radio and noted the gender imbalance of listeners and employees, noting that lots of radio listeners are women but not many radio professionals are.

Rock 955 @Rock955CHI breakfast presenter @AngiTaylorRadio says if she was a man she’d be further along her career by now #RDE22 @RadiodaysEurope pic.twitter.com/It7zx2B2xo

The importance of every listener shouldn’t be underestimated. Answering a question from a conference member, both explain that they present as if they were presenting to a single person, irrespective of gender. ‘People are people’ they say, and that ‘whatever comes out of that mic has to be right for the listener’.

Speaking of advice for future presenters, Angie’s top tip is to know what type of radio you want to get into and specialise in it. To improve your presenting skills and craft your communication, walk around your home and describe things you see. Angi agrees stating that anybody can read but that it takes personality to present.

Perhaps the most important tip of the talk, Angi urges conference goers to ‘find your elevator’, somebody who can elevate you, connect you, and raise you up.

In a session titled “What talent needs to thrive”, onsultant Francis Currie says Talent is the last sustainable competitive advantage’ over other radio stations.

As audio competitors like streaming services crop up, it’s only radio and the talent on radio stations that offers advantages over those other services.

Commissioned specifically for RadioDays Europe and conducted by Currienordén, a new international talent survey reveals that 59% of radio professionals spend between 1 and 3 hours preparing for their programmes. 12% prepare for more than three hours.

Paul Kaye (Vice President, Music Brands & In House TV Productions at Rogers Sports & Media) and Gry Forssell (Host at Mix Megapol) both agree those numbers are too low. 27% of people prepare for less than an hour which isn’t long enough to test material before taking it to air.

96% of people who completed the survey want to improve the programmes they’re on. The key way to do that is with human input, results show. Producers, feedback, coaching and discussion are key to creating positive changes within radio programmes. Very few people thought better music, marketing and co-planning was as important.

Paul and Guy agree that the relationship between Presenter and Programme Director is vital but the quality of relationship between those positions seems to be stronger in North America and Oceania than it is in Europe. ‘If we accept that talent is the bedrock of our business – the difference that makes the difference – why aren’t Program Directors taking it more seriously’, asks Francis.

Guy thinks that Programme Directors or Content Controllers delay airchecks and other forms of feedback in favour for other, more comfortable tasks. Paul suggests training on both sides of the spectrum is to blame for poor relationships with specialised, nuanced people skills required by both parties.

Concluding, Paul says that the best relationship is about holding up the mirror to allow presenters, producers and controllers to see the content in the same way as listeners so that both can grow. We’re in an audio renaissance and the future of audio is something to be excited about – and talent is one of the key components of that.

After a break and some lunch, more sessions on building apps, growing digital revenue and youth radio.

Nick Karkazis is the Programme Director and Head of Imaging at SPIN 1038 in Ireland. He doesn’t use the word “youth” too often because his audience wouldn’t really like that word, but he has worked incredibly hard attracting the “youth” audience to his station.

Nick has created several specialist shows. One of his most successful tricks has been to use podcasters to drive engagement and audience reach. SPIN 1038 has put successful Irish podcasts on the radio, and supported them with an on air radio personalities too. Has it worked? Yes, the audiences have come over and the station’s brand has grown massively.

Another strategy has been for SPIN 1038 to be visible at events and parties where the audience is going to be. Why do they do this? It’s not always about driving listening straight away, it’s more about being associated with cool events and being front of mind amongst younger demographics. The audience growth comes later…

They have been working hard to attract people who have not historically listened to the radio. Two things they have been trying to do: Give birth to new stars and give audiences lots of hip hop music (because younger audiences in Sweden love hip hop). One strategy, which has worked really well, has been to bring new hip hop talent to the station. Put hip hop stars on the radio…

And live music has been important too. P3 is inviting more and more rappers into the studio to perform, trying new artists and new formats regularly. The team prides themselves on being the first station to interview artists too. If they get there first, then the audience respects that.

In one of the final sessions on day one, three speakers from Sweden, Ireland and the UK, spoke about how to retrain and retain staff.

Sara Ardizzone is the Head of Human Resources at Bauer Media Audio in Sweden. She talked about some of the challenges Bauer had faced since the pandemic, especially around designing new offices and designing a new culture at their new offices.

Bauer is training and up-skilling staff, focusing on a learning and growth mindset, and ensuring that people feel they are still learning whilst on the job. Bauer has also turned their office into a “destination office” with workshops, meeting spaces and built-in flexibility.

Bauer is all about:

And being a great place to work.. Says Head of HR Sara Ardizzone at Bauer Media Audio Sweden #rde22 pic.twitter.com/l8qzXzUU09

Teresa Hanratty is the Project Manager at Learning Waves, a training group, in Ireland. She talked about the different programmes she had run to recruit talent. These included hosting media weeks (“get them young, treat them well, and you will have them for life” she said), boot camps, development programmes, broadcast law updates, and a graduate programme. It’s a comprehensive and strategic plan, and lots of broadcasters around the world could certainly benefit from what Learning Waves is doing.

All independent radio stations in Ireland are part of @LearningWaves and get better value by working together says @TeresaHanratty #RDE22 pic.twitter.com/k62WusHWnd

Sam runs the national radio awards, as well as other awards, training days and events. He tries to support audio professionals throughout their career from entering to exiting the industry. “A rising tide floats all boards” said Sam.

This particular slide aims to demonstrate the make up of the UK audio/radio sector, and how the Radio Academy sits in the middle, uniting people through their passion for the medium

All three organisations are doing some great work, and many businesses inside and outside of the broadcast industry could learn a lot from their work.

In the evening, more music, drinking and catching up ahead of another day of sessions on Tuesday. Watch this space to find out what happened one day 2!

Wow! What an amazing set of performances on Monday night at #RDE22… pic.twitter.com/88d9q8s2df