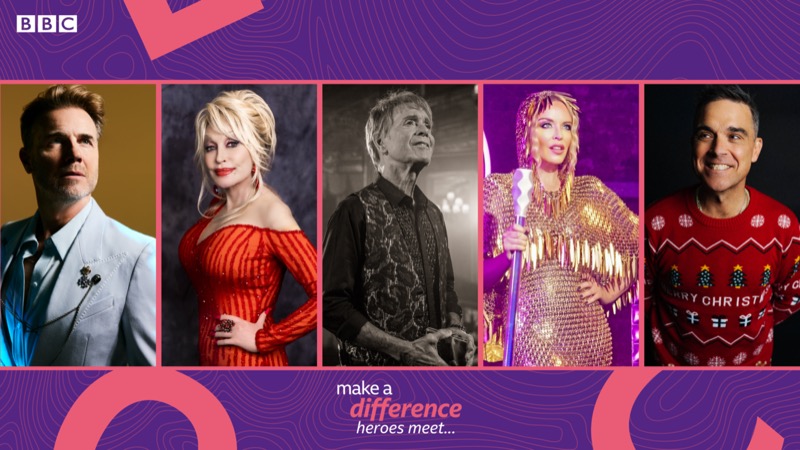 BBC weatherman Owain introduces the stars to some of England’s Make a Difference heroes of lockdown 2020 in a series that will air daily at 9am from Monday 28th December to Friday 1st January.

In March, all 39 local BBC stations across England launched Make a Difference – a virtual notice board for those offering help and those needing support. Every day the teams speak to local community heroes – people making meals for the vulnerable, sharing provisions and generally keeping each other going. Now some of these heroes get to meet their own heroes – music legends like Gary Barlow.

Gary speaks to fan Vicky Murphy from Glossop who set up a scheme for nursery children to write letters for elderly people in social isolation.

Gary Barlow said: “It’s a great time for us to all see our worth. The great thing about this time is that people are clever and people will get us out of this. What a brill idea, when you came on I thought this personality is going to lead to something great.”

Talking about his own charity work he said: “I always find it so comforting to know that I could do something. When you think of any individual – you, me anybody – what we do is so finite and tiny, but the bucket will only get full after all those tiny drops that we are fill it. The more people we can get to help others the better.”

He added: “I will keep bringing the music, you keep making a difference”

Chris Burns, Head of BBC Audio and Digital said: “This Christmas BBC local radio stations will be there for their listeners like never before. It will be unlike any Christmas we’ve experienced. Through our Make A Difference programming and lots of surprises we will bring everyone together and play our part in lifting the mood across every corner of England.”

BBC local radio stations are providing seven hours of local output on Christmas Day itself, and joining forces each weeknight between Christmas and New Year.